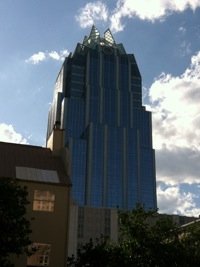 I was fortunate enough to be able to work out attending RailsConf 2012 in Austin, TX. ? This was the first time on many years that the conference was not organized by O’Reilly but rather Ruby Central, Inc.

I have to go on record and say I usually avoid cities but the city of Austin is a great place and would not hesitate to return. ?The people are friendly and there is so much diversity in the city that there is something new on each corner. ?I noticed an abundance of restaurants with so many different types of food. ?I can’t say I had a single bad meal during my journey. ?Everyone I spoke with about the trip said I had to try the BBQ, and they were right?it was fantastic.

Many of the sessions overfilled the room. ?This on in particular exemplifies what I’m talking about. ?I bet the fire marshal wasn’t aware of these. ?Overall the floors were pretty comfortable.

One of my favorite sessions was by Obie Fernandez about using Redis?with Rails. ?Although the examples of the talk were from his recent startup, they were excellent and showed integrating Redis into a Rails application not to remove ActiveRecord but to compliment it. ?Obie discussed a gem he released to help the integration called redis_props along with sample code used in the talk. ?The code is clean and concise?great stuff.

Another talk I found personal value in was the Semi Automatic Code Review by Richard Huang. ?Richard is the creator and maintainer of the Rails Best Practices gem. ?In the talk he discusses another related open source project called Railsbp.com which allows for your code to be reviewed when committing to Github. ?The results will be displayed on the Railsbp.com site where you can change the code right there and commit back to your repo. ?Very informative details produced from the site, GitHub allows hooks into the service and thoughtfully open sourced. ?I wasn’t aware of the site before but now I am using it regularly.

The other talk which I took a lot away from was Digging Deep with ActiveSupport::Notifications by Matt Sanders. ?This talk when into great detail with many examples of using notifications in your applications. ?It is similar to the event publishing and subscriber model from other platforms such as .NET. ?Having spent many years writing .NET applications this talk brought back many memories of this pattern. ?The techniques exemplified here I had never used in Rails but do need this functionality on a new project. ?

UPDATE (05/03/2012): One talk that was intended to be included here, is from Lori Olson. ?Her talk titled, Mobile Rage – What causes it & how to fix it?(Confreaks), takes the view of web application use on a mobile device from the user’s perspective and how developers can implement very simple techniques to ease the pain. ?I recommend this one highly, good stuff and some tips I was not aware of. ?I admit I have some sites that can take advantage of this. ? 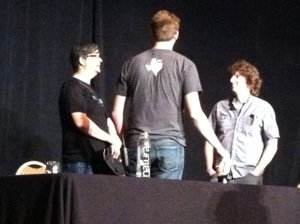 The final keynote of day one was from a non-Ruby developer, Rich Hickey, which seemed to be out of the ordinary. ?Maybe he was there to pull some Ruby developer to the Clojure world. ?It appears Rich is trying to convince these two Rubyist that LivingSocial would be better with Clojure. ?I wish I could have overheard the conversation.

There were three very large, two-sided, white boards used for companies to post jobs, and they were pretty full of opportunities. ?I noticed there were far too many companies attempting to make the next Facebook or Twitter and not enough companies creating really useful applications. ?There were exceptions from what I could see, but too few. ?I remember the same thing happening around 2000 and then the bubble burst. ?Apparently we are not better from this event in history because we have not learned from it.

I finally met face-to-face many friends I only knew from various social networks with lively hallway track discussions. ?I think this is the #1 reason to attend conferences. ?The materials from the talks are available everywhere and with Confreaks recording all the sessions, you can watch the show later. ?You can’t however, experience meeting new friends and seeing old ones without attending.

I recommend every Rails developer attend just one of these events, well worth the time and effort. ?The next on is in Portland, OR from April 29 to May 2, 2013. 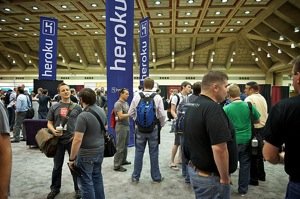 I mentioned in my review post of 2010 that I planned to spend more time networking, in particular attending conferences. ?I have a pretty solid schedule between conferences and vacation time to last me into the Fall.

I will be attending the first two representing InfoQ, so if you are speaking and want to get together to talk about what you are doing then hit me up.

Emerging Technologies for the Enterprise, April 27-28 in Philadelphia, PA. ?Please take a look at the speaker line-up. ?I will be attending the speakers dinner on Tuesday evening, please find me.

The 6th Annual Emerging Technologies for the Enterprise Conference has become the Mid-Atlantic’s go to conference for developers, architects, and IT executives. Subjects as expansive and intricate as emerging technology and Open Source require a dynamic forum. This conference provides just that, with industry experts providing up-to-the-minute insight.ETE 2011 brings together pioneers across the spectrum to discuss the principles, practices, and products that are transforming IT’s ability to drive the success of the enterprise.

RailsConf 2011, May 16-19 in Baltimore, MD. ?Please take a look at the speaker line-up. ?I attended last year and it was a great event, very well run. ?Being held in Baltimore again it is hard to pass up not attending.

Thanks in large part to the?Baltimore Rails Community who were such a great hosts in 2010, RailsConf is returning to Baltimore again in 2011. Happening May 16-19, 2011 at the Baltimore Convention Center, RailsConf is?the official event for the Ruby on Rails community. If you’re passionate about Rails and what it helps you achieve?or are curious about how Rails can help you create web frameworks better and faster?RailsConf is the place to be.?Learn more about RailsConf.

MicroConf, June 6-7 in Las Vegas, NV. ?I am tentative on this one only because of how soon it is coming and other work and family commitments. ?It is put on by Rob Walling and Mike Taber of Startups for the Rest of Us podcast. ?The event, focused on small software companies.

MicroConf is a two-day conference focused on self-funded startups and single founder software companies. A limited supply of discounted pre-launch tickets will be available soon; sign up for pre-launch below.

360iDev, September 11-14 in Denver, CO. This is my first conference covering iOS topics. ?After watching the session videos from the last event, I decided this was a good one to get started.

360|iDev is the first and still the best iPhone developer conference in the world. We?re not a publishing company pushing books, or a media company selling subscriptions. We?re a conference company, focused on community. Our goal is to bring the best and brightest in the developer community together for 3 days of incredible sessions, awesome parties, good times, and learning. If you don?t leave Wednesday night, with more ideas than you know what to do with, we?re not doing our jobs!

Business of Software 2011, October 24-26 in Boston, MA. ?I wanted to attend last year but the price of admission was too high, but this year an early discount rate made it happen.

In short, BoS is a meeting of minds in an incredible, nurturing, sharing environment where amazing people share their thoughts about building better, more sustainable, more profitable software businesses and getting more out of their lives in the process.

I may end up at some smaller conferences at the last minute involving iOS development or other business of software topics. ?Hopefully some become available after October.

Again, anyone reading this attending, please hit me up as I would love to meet and talk.

RailsConf 2010 was this past week in Baltimore, MD.  I decided to make the trip down from CT since it was only about 5 hours by train.  Many people have already covered the conference around the interwebs and I am not doing it here.

I had a great time, meeting many new friends and catching up with some old ones.  I arrived on Sunday evening and attended the Ignite RailsConf event.  This event had excellent content and was well attended with about 200 people coming out.

Monday came and we had a full schedule of 3-hour tutorial sessions.  These were good but the unfortunate thing about multi-track events is missing some sessions I would like to see.  It appears the keynotes were the only sessions being recorded, which is too bad.

The keynotes were really one of the highlights of the event for me.  I get the most out of these as they are typically by members of the software development community which are not necessarily Ruby or Rails related. The exception here was really Gary Vaynerchuck, which I missed because I was traveling home.  Thankfully, O’Reilly was recording these sessions and I can watch when I have the time.

Anyone who did not attend RailsConf should check out the recorded keynote sessions from DHH, Yehuda Katz, Derek Sivers, Robert Martin, Gary Vaynerchuck, Michael Feather, Neal Ford and Evan Phoenix.

Attending all these sessions during the week were really exhausting.  As I write this on Saturday I still feel tired and imagine I won’t feel rested for a few days.

I have come to learn that the real value of any conference is not the knowledge acquired while attending the sessions but the friends and acquaintances we see and the new relationships formed.

I met many people who I knew only from the online world, interacting on my blog or Twitter.  I was fun to see how the people looked different than their Twitter pictures, many look very different.

I did have a good time at RailsConf but it was exhausting.  As I write this today I am still really tired from the 5 days I was away.

I find it interesting how people take in a conference, how they spend their time.  As I attended talks I looked around the room to see a sea of Apple logos of the MacBooks in the audience.  I noticed people with their MacBooks spending the session writing code, surfing the web or using Twittering.  I repeatedly wondered why people make the effort to attend a session yet do something other than pay attention to the speaker.

I have been to both large and small conferences and especially after this RailsConf, I keep think that smaller single track conferences are the way to go if you want the chance to have a richer environment.  I missed several people I wanted to meet but never ran into them, which goes to show the size of the group.  Smaller conferences typically have 100-200 people and gives attendees a better chance of seeing everyone.

I am looking forward to attending more computer science and engineering related conferences this year as well as some business-specific ones such as BizConf.  I think these are the types of conferences I will gain more value from, rather than simply Ruby-specific.  I hope to see you at a conference soon.