I recently had the chance to attend CocoaConf?DC in Herndon, VA, June 28-30 at the Crowne Plaza Dulles. ?Unless you have been living under a rock, you have heard of CocoaConf but for those that haven’t, CocoaConf is a small, focused iOS and Mac developer conference. ?The idea of CocoaConf is to be small, intimate and come to you. ?Conferences such as Apple’s WWDC are huge (5000+ attendees) and it costs people a small fortune between conference ticket, travel, lodging and food.

CocoaConf is different in that it happens multiple times a year in a different city, closer to people who want to attend but don’t want to spend the big dollars for travel. ?The regular price of $600 (after early-bird of $450)

The people behind conferences are usually the ones that make or break the experience. ?Sure one can say it’s the sponsors or even the attendees but without good organizers, it just doesn’t work.

The conference organizers for CocoaConf really did make the conference a real pleasure. ?The unusual things about the organizers, they are a family. ?A single family headed by Dave Klein and his outstanding children of varying ages. ?From Dave’s Twitter profile he says he is:

Christian homeschooling father of 13. Author of Grails: A Quick-Start Guide.?http://tinyurl.com/GQuick

And they homeschool; impressive indeed. ?I’ve ever seen this before. ?I have seen friends and associates but never a family.

The Klein family did a fantastic job of running this conference, well organized and very attentive.

Although the conference is touted as being in Washington DC it is really in Hearndon, VA. ?It seems all the VA towns near DC consider themselves part of the city. ?

The conference was held at the Crowne Plaza Dulles. I have attended a few conferences at a Crowne Plaza and they always please. ?They really are a conference center and do a fantastic job of taking care of both guests and attendees during the conference. ?

I have to say the food during the 3 days was the best food I have seen so far at a conference. ?Each day included breakfast and a huge hot lunch in buffet format with food for each palette and eating disorder, er I mean eating selection.

The discounted room rate really made a big difference as well.

Chris Judd taught an awesome iOS Tutorial on the day before the official conference started. ?I was fortunate enough to be able to attend and learned a bunch along the way. ?I wanted to pick up some tips, especially for Storyboarding, and it was well worth it. ?I was exhausted after this intense day.

Even if you are an experienced developer, take this day of training because you will have an audience to ask questions of and learn some things along the way.

It was great that we were kept busy and having an NSCoderNight was awesome. I ?have always wanted to attend one of these hacker nights but none exists in our area and hadn’t had a chance while traveling. ?It was a great time with people just sitting around discussing iOS and Mac development along with other aspects of their business or job such as supporting Android with a big application across many handsets. ?Good content.

The session list for CocoaConf was long and consisted of a who’s who of the Apple developer community, including Daniel Steinberg, Chris Adamson, Mike Ash, Mike Dalyrmple, Chris Judd, Saul Mora, David Smith ?and other great local speakers.. ?The topics covered a large array of topics with an audience ranging from beginner to experienced developer. ?

When attending conferences I try to pick the sessions that I can’t normally find the information easily online. ?These are usually topics that are experience-based or deep topics that are make digestible by the speaker. ?Sessions that exemplified this:

There were 3 tracks and a total of 30 sessions and a keynote on Friday evening giving us knowledge until 8:00pm. ?After the first two days, my brain was truly mush and I was very exhausted.?

One of the reasons I like to attend conferences is because of the other attendees I meet. ?I always find the story of others interesting and inspiring. ?

I met a lot of people and made many new friends all from different skill sets and walks of life. ?I heard many stories of application success and some failure. ?There were people who had been writing Objective-C since the early days while others just starting out.

It’s also inspiring to see young people finding enjoyment in coding. ?Conferences don’t seem to attract young people but at CocoaConf there was one exception. ?A young developer who came all the way from Texas to join the fun and learn. ?He was 14 years old and already had 5 application in the Apple App Store. Quite an accomplishment with the demands of school today. ? He was very well-spoken and a pleasure to talk with.

This conference is small, 80 attendees or so. You can almost meet every person if you try over the 3 days.

I really had a great time at this conference. ?I have attended many conferences over the years and the combination of the great group of organizers, venue, content and the attendees, made this the best conference I’ve attended. ?I would certainly recommend this to others and I will return to another CocoaConf.

Did I mention the swag? ?T-shirt, logo’d notebook and pen, bag and an awesome coffee mug. 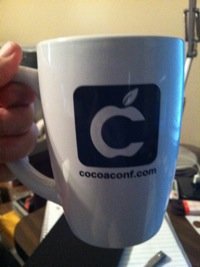 CocoaConf is not an annual conference but is run many times over the course of a year in a various cities, making it easier for you to attend. ?The next city is Columbus, OH, August 9-11 and future cities with unannounced dates are Raleigh, NC and Portland, OR.

The only thing I would change or add to this conference is recording of sessions. ?I know it’s expensive and some speakers don’t want it but it would help overcome the tough choice of which session to see in a multi-track event. ?It’s minor, but would be nice.