It appears companies are having a difficult time finding enough mobile developers to suite their needs. ?As reported by the Wall Street Journal:

The intense competition for mobile engineers, which affects large companies and fast-growing start-ups alike, is emerging as a key bottleneck as companies scramble to capitalize on the fast growth of smartphones and other mobile devices.

I wondered when we would start reading reports of such problems. ?With Apple, Microsoft and Google releasing new version of their respective mobile operating systems and selling handsets at a blistering pace, companies see the obvious opportunity. ?The opportunity may be there but developers are hard to find regardless of the technology. ?This only makes it harder.

Developers today should be looking at each of the big companies and learning some aspects of one or more platforms. ?Even if only learning a cursory level of the platform, enough to speak intelligently about the technology can go a long way.

As developers know, we are in a great place to make a good living but

The mismatch has put upward pressure on wages. According to an October survey by tech job board Dice.com, about 31% of companies reported that average pay among mobile software designers and engineers increased at a higher rate than normal, mostly because of heightening competition for talent.

The Dice survey said the average mobile salary last fall was about $76,000, but several companies said they pay experienced mobile developers anywhere from $90,000 to $150,000 a year.

Picking a technology doesn’t seem to matter. ?Based on this graph, everything seems to moving at the same pace: 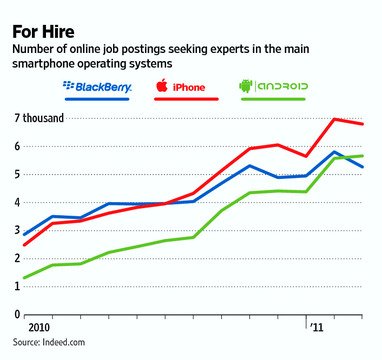 The exception here is BlackBerry, which seems to be declining. ?I think Windows Phone 7 will be replacing some of the BlackBerry development and being a viable mobile development platform going forward.

So, where to find out more about important mobile platforms today:

So, instead of watching re-runs of Gilligan’s Island this weekend, get out and read about these platforms and explore some code. ? If demand is growing at the pace we see here, there is no time like the present to bettering yourself.

I know I will be spending some extra time learning a bit more about the new updates to Windows Phone 7 announced at Mix 11.