Each seemed to work well at first but after a short time their weaknesses surfaced. I was able to return the Matias but I have a pile of lackluster keyboards.

I used to love the original IBM PC keyboard. You know the one, it was loud and had a very responsive feel. I knew when I was pressing a key, no doubt about it. The feedback is fantastic from the IBM keyboard but those are a thing of the past.

Apple once made a keyboard very similar the one from IBM, but those are also a thing of the past. I understand you can still find them from time-to-time on eBay.

I remembered a post by Jeff Atwood where he talked about his dissatisfaction with keyboards, the solution?create his own. I never thought of creating my own but since Jeff is a developer, then maybe his wants were similar to mine. The result is The Code Keyboard. 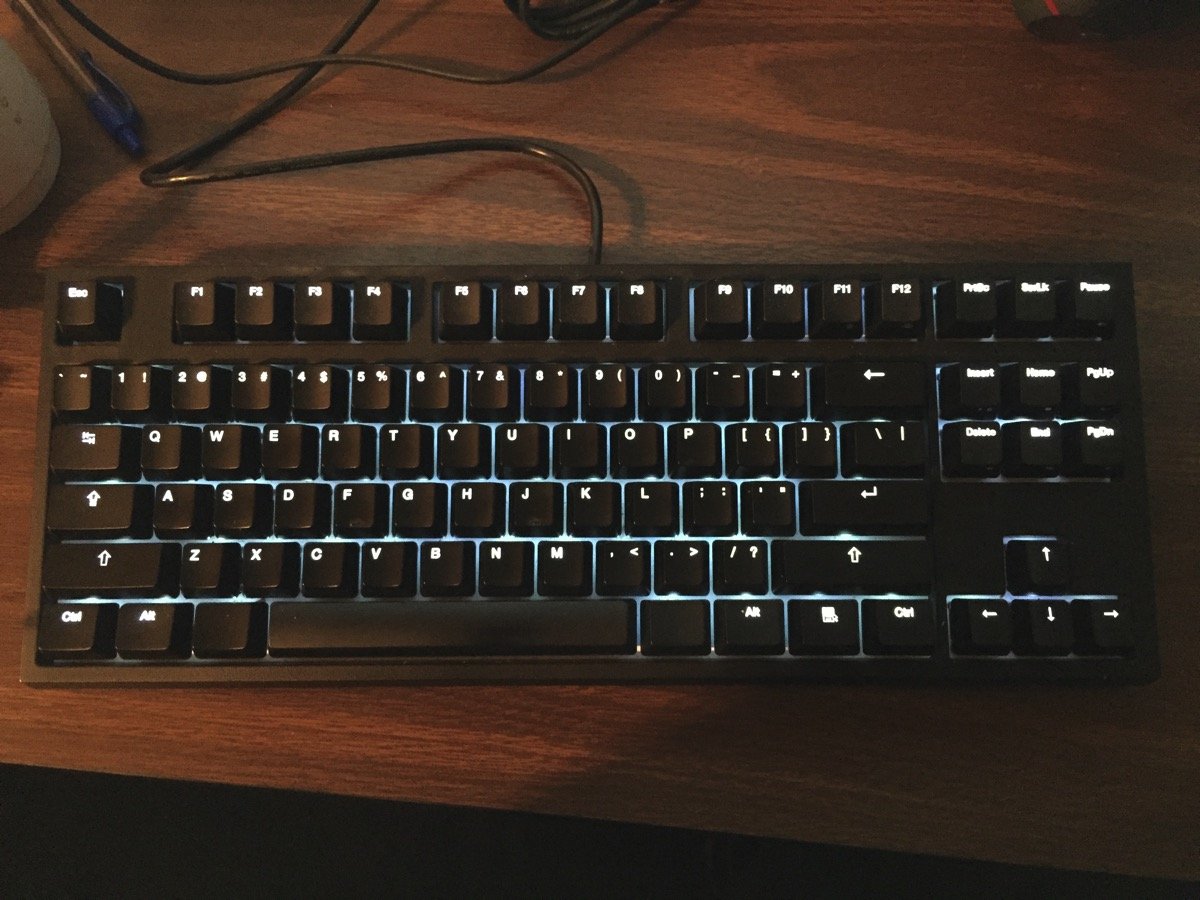 This keyboard is HEAVY. It feels like the IBM PC keyboards of old. A solid, beefy and well-built keyboard. The CODE website says it weighs 2.42 pounds, but I don?t know which version it refers to.

The keyboard is offered in 87 and 101-key options. I chose the 87-key version because it uses less space and I don?t need a numerical keypad. The key options is what really drew me to this keyboard. Cherry keys switches are used offered in green, clear and brown. I?m using clear and picked these due to sound; of the three the clear switches have the last ?click? sound but still offer the tactile feel. ?Even though I have the clear switches, they aren?t silent:

Ultra-rare Cherry MX Clear mechanical key switches are the heart of the CODE keyboard. These switches are unique in the Cherry line because they combine solid actuation force with quiet, non-click activation, and a nice tactile bump on every keystroke. These hard to find switches deliver a superior typing experience over cheap rubber dome keyboards ? without deafening your neighbors in the process.

The keyboard is backlit, which is really nice. It?s not a feature I required but after having it, I love it. It?s useful when I have the lights off in my office and I?m working.

There are a set of DIP switches on the underside, used to control various functions; such as turning backlighting on and off, keyboard layout (QWERTY, Dvorak or Colemak) and Mac support.

Mac support was critical for me when searching out a new keyboard. I hate having Mac support as a second-class citizen. I want the command key where it belongs, next to the space bar. This is easy with the CODE, just a DIP switch change. The only problem, now the Alt key is in the wrong spot. Thankfully WASD has take care of this for us, they include a keycap puller in the box that allowed me to easily swap the keys I needed. ?Really nice touch.

WASD also offers replacement key sets in various colors and custom key sets such as the Mac command key and others. I found them to be a bit pricey so I just stuck with what came stock.

I?ve been using this keyboard for going on 3 months and could not be happier. I use this keyboard for writing software as well as my daily writing, emails and Twitter. It?s not ergonomic and I wondered if it mattered. So far, it has not mattered at all.

The key presses are smooth, no binding, just nice press with tactile response and a clean release. This is how a keyboard should be?no mushy keys. For the same reasons I use an Aeron chair, spending money on a good keyboard is as important as any piece of furniture.

A nice touch is the media keys on the far right of the keyboard. These keys allow me to pause and play podcasts in Instacast and control the volume. A really nice touch with great positioning.

All the media keys are clustered together for easy reach, not spread out along the top of other keyboards.

I?m hoping this keyboard lasts a really long time because I love using it everyday.

You bet! This is a great keyboard. Considering the keyboards companies dare ship with their computers today it?s not really hard to make something better. ?The CODE is great, not just better.

The price is probably what will keep people from buying it. At $171 delivered to my door it?s not exactly inexpensive but either are the other tools I use. A craftsman who has the best tools isn?t necessarily a better craftsman but at least he can?t blame his tools.

If you?re in the market for a really well-built, durable Mac-compatible keyboard then you should at least consider this keyboard.