I’ve been using with rbenv to manage installation and switching of Ruby versions for the pass year and have been very happy with it. I recently took the plunge and upgraded my main Apple MacBook Pro from macOS Catalina to Big Sur. Everything seemed to work well after the upgrade. Until I tried to install a new version of Ruby.

When performing the usual command to install Ruby with rbenv, I started getting this message:

Trying to figure out the problem by looking at the message, it didn’t seem like something I could fix. Searching the rbenv Github issues didn’t give many clues. Knowing that rbenv uses ruby-build to automate the Ruby build process, I looked at the issues reported. It looks like I was not the only one having similar problems. 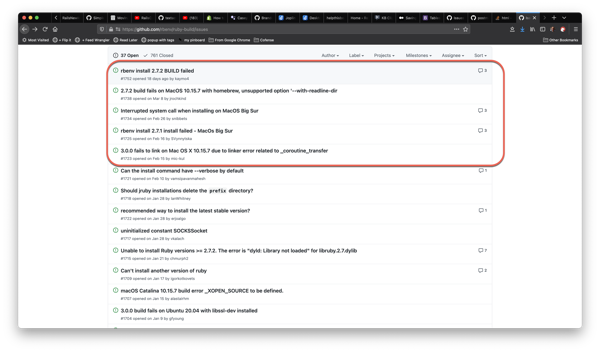 I tried several of the suggestions found from those issues and none of the solutions worked.

I decided to turn to my friends on Twitter to see if anyone had faced this issue. Twitter never lets me down and Robby Russell of Planet Argon came through,  suggesting installing Ruby with these CFLAGS:

It worked perfectly and I was able to get additional versions of Ruby installed. This should also work if you’re having problems with asdf Ruby version manager too. Asdf uses ruby-build behind the scenes.

For those interested in the details, they can be found in the ticket – Installing older Ruby versions on OSX after Xcode 12.