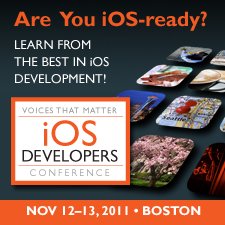 I am very excited to be attending the Voices That Matter: iOS Developers Conference in Boston, November 12-13, 2011. ?It is put on by the folks of Addison-Wesley Professional, one of my favorite publishers.

The speaker line-up looks fantastics, from the VTM site:

Learn all about developing applications for the iPhone and iPad at the Voices That Matter: iOS Developers Conference. You can learn from leading authors like Erica Sadun, Chris Adamson, Erik Buck and Aaron Hillegass and meet industry leaders such as Graeme Devine, Rod Strougo, Jeff LaMarche and Mike Ash. Join us in Boston, November 12-13, 2011 and learn how you can leverage Apple?s commitment to the iOS platform.

This will be the first Voices That Matter conference I have attended and will be doing so on behalf of InfoQ. ?I hope to meet and talk with some speakers and attendees looking to chat about what they’re up to. ?If you are reading this and plan on attending, send me an email.

As my company is taking on more projects in the mobile space, particularly iOS applications, I find it increasingly important to get out and meet others who are also creating mobile applications.

Anyone interested in attending, registration is still open and early bird ends September 30, 2011. ?They have active Twitter and Facebook accounts where updates about the conference and authors are posted. ?I hope to see you there.