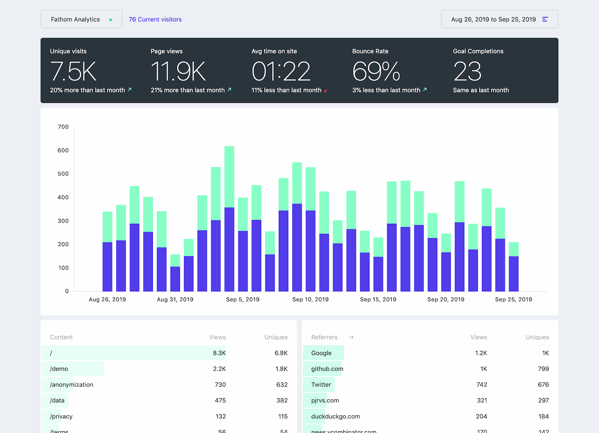 I’ve used Google Analytics for many years, and continuing because it’s free. As time has gone on, I’ve decided to use Google products less and less.

Google Analytics always seemed to be complicated or maybe overly complex for the pieces of data for which I care. It gives many details I have never used.

I started looking for an alternative analytics tool. I discovered Fathom. Fathom offers excellent features and the ones I care about most. I like to be able to see:

I did a quick informal survey of analytics tools on Twitter that resulted in a favorable response for Fathom. They offer a 7-day trial.

Installation is simple, add a JavaScript snippet to each page or template to start tracking. If you use WordPress, there is a handy plugin that adds the Fathom Dashboard to WordPress. One issue I had was getting the analytics dashboard to show up in WordPress and making sure sharing is enabled. You need to tell Fathom to share data with WordPress because it’s an external site.

Notice the setting, the default being Viewable by You. Change the setting to Viewable to anyone with the share password. 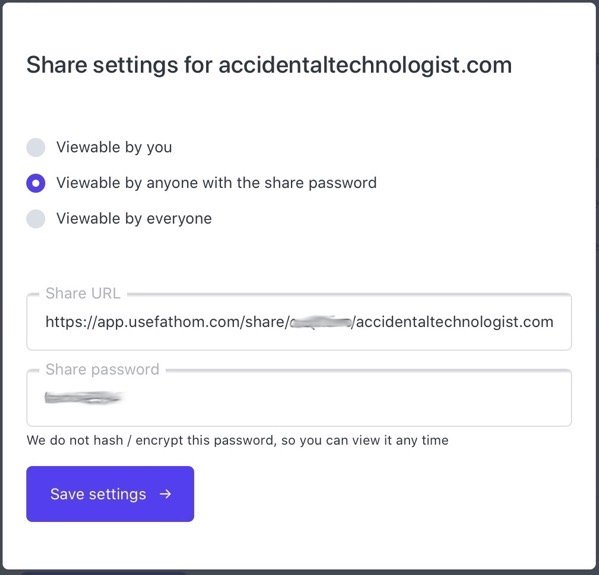 If you ignore this setting, you won’t see analytics in the WordPress Dashboard, only a 404 error.

I contacted Fathom support a couple of times, and they were quick to reply from both Twitter and email. A couple features were missing, and support informed me of their full pipeline where features are always being added.

After using Fathom for the past few of weeks, it’s a great solution, and happy I made the change. I purchased an annual plan. Glad to support an indie developer.

If you’d like to check out Fathom and help me out, use my referral link. 🙂

I use MarsEdit from Red Sweater Software as my exclusive blogging tool on the Mac and have over the last couple years. ?I tend to write lots of draft posts on my desktop Mac Pro that never get published or I work on them when I can before pushing out to my WordPress blog.

I also use MarsEdit on my MacBook Air when I travel or even if I am working on the couch in the evenings. ?All of the drafts in MarsEdit are saved locally on the computer I am going the writing and once I want to be able to edit from the other computer I end up pushing as a draft to the blog and pulling it down via MarsEdit. ?This is a tedious task and has problems. ?I don’t know how many times I pushed up a draft and forgot I did a few days later only to work on an old draft locally.

I then had the idea of possibly setting up MarsEdit to save local drafts to Dropbox but there didn’t appear to be an option in MarsEdit to change the location of local storage.

But?there is usually a way to do anything.

The steps below worked great for me, you mileage may vary. ?If Dropbox is installed in its default configuration then these instructions should work for you. ?I configured my systems with my Mac Pro being the “main” system and my MacBook Air as the secondary. ?I had local drafts on my Mac Pro but NOT on my MacBook Air. ?If you follow these steps exactly and have local drafts on each system them you will lose data.

Without further ado, follow these steps. ?I assume you know how to open a terminal sessions and feel comfortable typing command.

1. Make sure you quit MarsEdit from each system you are going to change the location of local drafts.

2. Find local MarsEdit drafts on your main system – A bit of spelunking reveals where they live in:

3. Create folder for drafts in Dropbox.

4. Move the local drafts from the main computer to Dropbox, enter these two commands:

5. Now let’s fool MarsEdit into thinking nothing has changed. ?Symlink the old name to the new location.

Now, on each of the other machines start with step 6.

6. Remove the local draft folder (if it’s not empty and delete you will lose data).

7. Time to fool MarsEdit here too.?Symlink the old name to the new location.

Repeats steps 6 and 7 for each computer you need to share local drafts.

Once you start up MarsEdit on each of these machines, you should see the same local drafts. ?If not, then double-check the steps above.

The Apple iPad is the single most exciting technology to come since the introduction of the IBM PC many years ago. ?I am old enough to see both come to market. ?The iPad is a platform for content consumption and we are seeing only the very beginning of how creators will visually delivery their content to us.

I have in recent months moved this blog to WordPress from another self-hosted platform and often wonder how I waited so long to make the transition when I see the great themes and plugins made available to us.

The recent release of WordPress 3.1 made me aware of one such plugin. ?Onswipe plugin allows any WordPress blog to have a unique view when viewing on the iPad. ?The implementation looks very much like my current favorite iPad app, Flipboard.

Onswipe makes it insanely easy to publish on touch enabled devices. When your readers navigate from an iPad to your site they are given a beautiful app like experience.

This is a pretty bold claim but one I think the plugin lives up to quite handily. 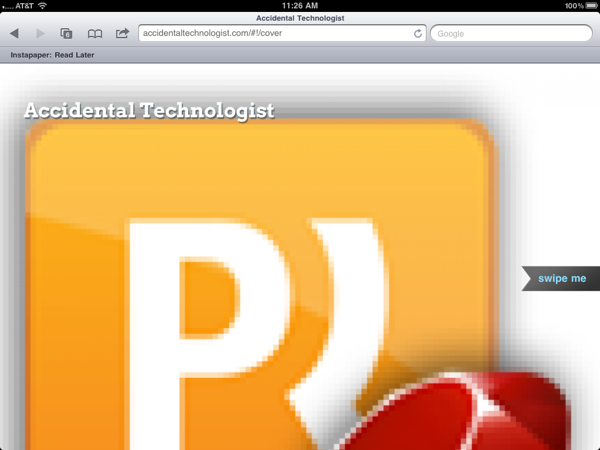 I installed the plugin from the WordPress Dashboard and accepted the defaults. ?Above you can see what my blog looks like on the front page, taken from my iPad. ?If you are familiar with the Flipboard application, the user is presented with “swipe me”, a simple gesture brings the user to the first page of the site. 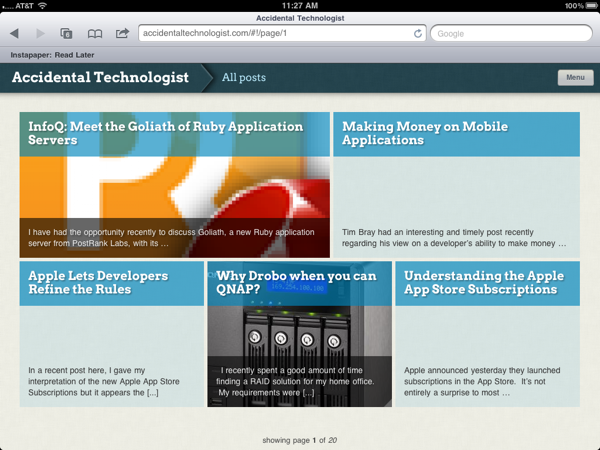 What interests me here is 5 posts shown per page and *if* I had an image associated a post, ?the image would be used. ?I think if there are multiple images in the post the first one appearing in the HTML will be used. ?The content is really nicely laid out and presented cleanly without any work on my end. 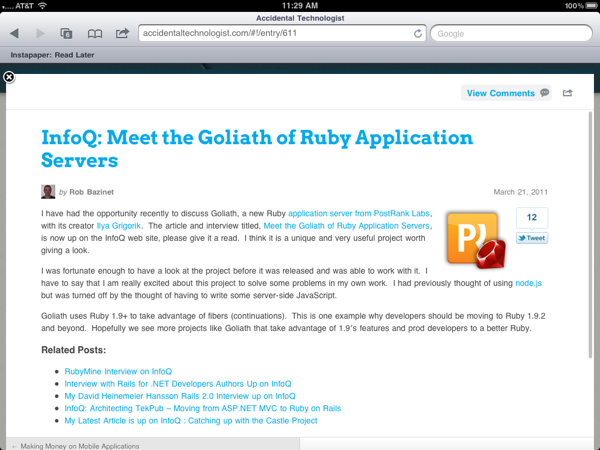 The page for a particular post has a very clean presentation. ?The font face and the color of the title are customizable from the WordPress Dashboard. ?Any comments for a post are visible from the View Comments button where users can also add new comments. 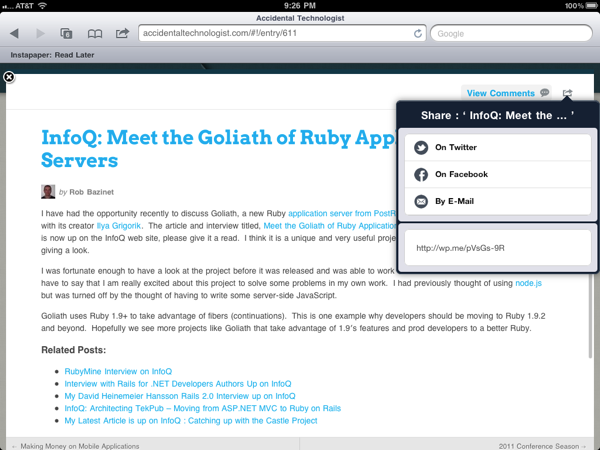 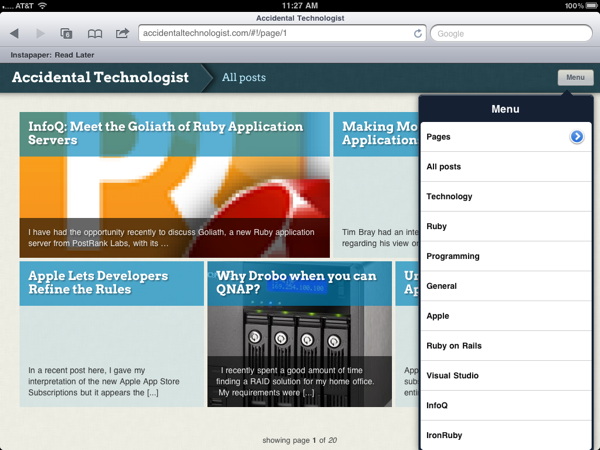 The menu button from the front page allows easy navigation to Pages, posts by a particular category or all the posts.

I have tested this blog from my iPad and it really is a thing of beauty. ?The HTML5 is well done and fast and truly transform my blog both in function and in presentation. ?Well-done Onswipe, who looks to have some other offerings on the horizon.

So, go grab your iPad and take a look at this site using it.

I have been having a lot of problems lately with my self-hosted WordPress instance on one of my Linode ?slices?.? It seems around 2:00 AM, starting a few weeks ago, CPU utilization would spike to astronomical numbers and only get worse.? The solution was to reboot the node and things would return to normal.? This is not exactly a great way to spend my time as I am not a Linux admin guru nor do I want to be.

The strange thing about this sudden CPU problem is that nothing had changed on the node, no configuration changes, no upgrades?nothing.? Peering at the processes causing the issue revealed the culprit to be Apache.? A few hours of trying to fix this myself made me come to the realization that I was really wasting my time and I needed to move my WordPress site to someone who knew what they were doing.

After a bit of investigating and feature/price comparison, I settled on WPEngine.??? They offer just about every feature that made me self-host in the first place, including being able to manage my installation; WP versions, plugins, themes, skins, etc.? They do offer things better than my self-hosting provided:

These are all the things I don?t want to have to worry about and don?t have the skills to manage correctly.

So as of January 12th, this blog now runs on WPEngine.? Oh, they also offer expert support and I can vouch for it.? I took full advantage of it after totally hosing up importing my current blog into the new site.? They helped me quickly and I was up and running in a matter of a couple hours, it actually took the longest for the DNS changes to take effect.

The company consists of industry veterans who are WordPress experts indeed.

The site seems much snappier now and I don?t have to worry about CPU utilization on it any longer.