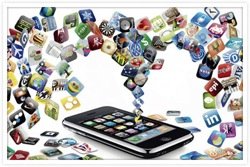 The New York Times had a great article this past weekend titled?As Boom Lures App Creators, Tough Part Is Making a Living. ?As the title indicates, the life of a mobile developer is not often the glamor we hear about. ?The million-dollar jackpots are few and far between and are more difficult now than in the early days of the Apple App Store.

The article chronicles the two very different levels of success; one, Ethan Nicholas who created the iShoot game and made over $1 million in 2009. ?The other part of the story is a couple who worked full-time on a handful of applications focused on children.

It saddens me when I see smart people treating the app store akin to The California Gold Rush; same state and the same dreams of getting rich and too often a very similar outcome:

The Grimeses? quest cost them more than $200,000 in lost income and savings. So far this year, their eight apps have earned $4,964. When the newest iPhone came out at the end of September, the couple immediately bought two.?

I can attest to the same experience as the couple who lost it all. ?I didn’t let it go that far but having an idea, creating an application over a couple months and receiving very little return for my efforts?followed a similar path. ?In hindsight, I shouldn’t have been surprised.?

The app store is stocked with so many applications it’s almost impossible to stand out in the crowd. ?Unless you are well-funded and can afford a lengthy and costly marketing campaign you will likely be cast to the abyss that is the app store. ?Those lucky few will be selected by Apple to be promoted on the store, to be glorified in iTunes and will go on to nice rewards.

This is not the path a smart business person should travel. ?Developers are smart, we work hard and just want to be rewarded for our efforts. ?It is because we are smart that we should step back and think about the path of one-time customers greedily parting withe their $2.99, $1.99 or, I shudder to say, their $0.99. ?We can’t support our families with these measly morsels.

Creating applications for iOS and Android are fun and very rewarding but these platforms should not be the island for your application. ?The people building businesses in this space today should be cleverly thinking of ways to monetize their idea without the goal of hitting gold but rather building on a customer base willing to keep giving you money. ?How many applications can someone create, sell for $0.99 and get a lifetime return of $5,000?if you’re lucky? ?This is not even breaking even, it’s a really weak business model.

The better approach is solving real problems for someone who is willing to give you money to ease their pain and continue this on a regular basis.

Refer back to Ethan Nicholas and the direction he has taken since his million-dollar application idea:

Mr. Nicholas and a friend, Brent Miller, were inspired to form a company. ?We were going to make another million or two,? said Mr. Miller, 38. But when none of their new games sold like iShoot, the pair moved in an entirely new direction. They founded echoBase, a start-up with 14 employees that is developing apps to allow doctors and nurses to view and update medical records across different computer systems. They brought in Mr. Miller?s father, Rod, a former I.B.M. sales manager, as chief executive.

This is an example of a solution to a real problem, making the life of doctors better and at the same time providing accurate and reliable care to the patient. ?The application is free on the App Store but it’s very clear in the description that a server piece is also needed. ?I am sure THIS part is not free. ?This is someone who has made it in the App Store but realizes it’s not easily reproducible. ?This should be the type of applications we are creating, ones that create a revenue stream for developers but also add real value to users.?

An organization like echoBase has iOS client software and some generic server piece which opens the doors to using other clients as well. ?Anything from Android and Windows RT to web and rich Windows Desktop apps. ?

The Apple App Store is very different today than it was in 2009 but it still holds great value to the people who are smart and don’t try to play the app lottery.?