You are here: Home / Business / Bootstrapping Your Ideas
Tweet 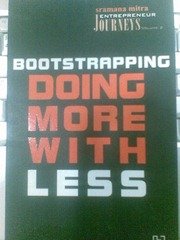 As an individual entrepreneur it is sometimes hard to get things done with our limited time in a day and limited financial resources.  I find it helpful to have a large base of contacts which I know well and can reach out to when I need a hand, but timing may not always be right.

Derek Sivers had a great post recently titled "How to hire a programmer to make your ideas happen?".  Derek discusses some great points when looking to bring your idea to fruition and suggests using services such as oDesk, elancer, guru.com and vworker:

Go to the following sites to open an account at each: elance.com, guru.com, odesk.com, vworker.com

Post this short project at each site. Use their escrow service. Location of provider doesn’t matter – they can work from anywhere. Don’t pay for a highlighted listing. Pay by the hour. Set the bidding time limit to 7 days. Most bids will come in the first 3 days.

You’ll get many offers, but if they don’t have your magic phrase at the top (?I AM REAL? or whatever), delete them. This is very hard to do, since you’ll feel thrilled that so many people are offering to help, saying things like, ?We have looked at your project and would be glad to complete it immediately,? but trust me and delete those. If they didn’t read something marked as VERY IMPORTANT already, you don’t want to work with them.

Also important: Only go for providers who have great reviews from many past customers. This shows they are used to working this way through this site. Decline bids from providers without many great reviews.

Don’t aim for the lowest bid. Use these sites to find someone that seems great and capable, even if they are twice as much as the lowest bid, they might work 10 times faster and better.

Each of these sites has its quirks, so sorry I can’t recommend specifics for everyone. But be considerate and nice, once they’ve mentioned your VERY IMPORTANT phrase to prove they really read your requirements. That’s cold enough. Once they’ve passed that test, be very responsive and friendly.

I have worked with a couple of these sites and have had the best experiences with oDesk, of course your mileage may vary.  Taking slow, careful steps when working with these resources can lead big jumps toward your goals.

I try to find people on oDesk who are individual freelance developers setting out on their own or supplementing the income they already have.  It is not always easy working with developers from these sites, but I have found a few rules I try to stick to which has helped:

It has taken me a while to be better able to choose a good developer through oDesk.  It certainly can be done but takes some trial and error to see what best works for you.

Hiring local developers is my long-term goal for my business but until I can afford the commitment to hire full-time, I will use freelancers I can afford.  I have hired before and had to lay them off, it is not a fun thing to do.

Brining on these inexpensive contractors can allow you to try out an implementation of an idea long before you hire and gets it to market that much faster and so much cheaper.  It is very hard to go wrong indeed.

Using these type of outsourced resources are applicable to both those full-time freelancers trying to get an idea developed but the idea of doing it on the side just never works.  This also works for someone with a full-time job trying to do the same thing, get something going on the side during those ?extra? hours that never seem to appear.