You are here: Home / Business / How I Don’t Provide Customer Service
Tweet

I recently bought a Mobee Magic Charger to stop having to replace the batteries in my Apple Magic Mouse so often.

I immediately had issues with the Magic Charger and figured I must have a possible defective unit because it should not work this way. I wrote up a blog post about my issues and submitted a support request to Mobee.

You can see below the Mobee Support Form asks the right questions, clearly taking my name: 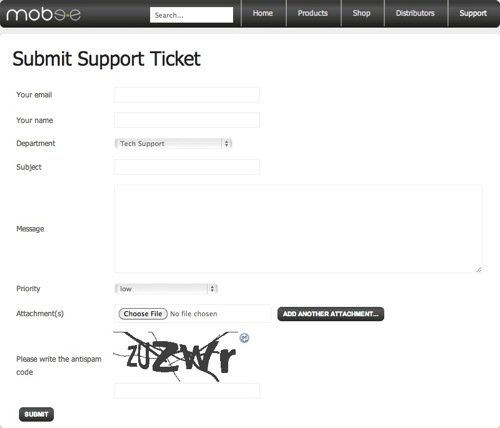 I have just purchased a Magic Charger and having some issues. I put the mouse on the charger and the power light flashes green but never gets to a solid green light indicating the charge is complete. I have left the mouse on charge for over 24 hours and still blinking.

The charge level of the battery never goes above 76%.

It appears I may have a defective unit. I heard similar issues with the charge level not going above certain levels from other users.

How can these issues be resolved?

And their response on April 12th:

– Remove the battery pack from the Magic Mouse and place it on top of the base station. Please confirm that the LED is blinking green ?

– Leave it during a full night on the base station, please confirm that the LED is now full green ?

It is normal if you seen a battery level of 76%.

You can fin the explanation on the link below:

The first thing that stuck in my mind is “Dear Customer”. ?What? ?They took my name in the support request form but don’t use it to address me. ?This may sound picky but it really annoys me when companies do this. ?Take the time to use my name, otherwise, don’t ask for it. ?This tells me you really don’t give a damn about me but rather I am just a response in your customer support system.

My two problems could have been addressed better. ?The first one, “It is normal if you seen a battery level of 76%”, is a result of a poorly designed and implemented product. ?How many support requests do you think Mobee gets on this one? ?Well, enough to put in a FAQ. ?As a product owner this would bug me until I engineered a way to make it go away.

The second problem where the Magic Charger seems to charge forever, never giving an indication it’s done. ?So, based on the answer to issue #1, 70-something percent is normal, a full-charge should occur in some magic window of 70 to 80 percent. ?Well, the batteries charge to that level but don’t get any higher yet the charger is still blinking. ?The suggested solution to the problem is “Remove the battery pack from the Magic Mouse and place it on top of the base station.”. ?Now, I may have missed something but I thought the purpose of the Mobee Magic Charger was to be more convenient? ?If I need to remove the batteries to charge them, then why not just use regular AA rechargeable batteries? ?They would certainly cost a lot less.

Rather than admit I might have a defective unit or apologize for a poor design, I need to remove the batteries from the mouse to charge them and know I have a full-charge at 70-something-percent.

As a product owner I would not ever handle support this way. ?I always address the customer by their name, not some all-fitting title, offer a way that fixes the problem to their expectation OR offer to refund their money. ?I think this is a pretty simple way of doing customer support, fix the problem or offer a refund.