You are here: Home / Microsoft / The Story Begins and Ends the Same for Microsoft and Windows 8 Success
Tweet 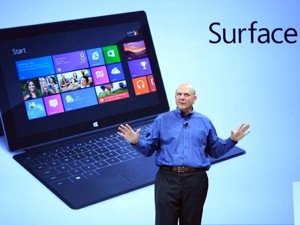 I’ll be the first to admit to being critical of Microsoft over the years. ?I used to be heavily invested in their technology stack but became disenchanted when they consistently seemed to keep changing direction, dragging developers along for what was often an unpleasant ride. ??

I think Microsoft has a real chance here with Windows 8 and their Surface devices to be a competitive presence in this growing tablet and ultra book market..but only if they can play it well and I’m not convinced they can.

Dr. Dobb’s says?Windows 8: The Most Confused OS Launch Ever.
?
I am a pretty experienced developer with 20+ years of professional experience and have been using Windows since the original Windows 1.0 and before that with MS-DOS. ?So, yeah..I know my way around the Windows world, but the marketing department needs to get their act together and unify the message. ?I mean the name Windows RT, seriously, who was the clueless marketer who came up with this name?

One of the biggest challenges I faced when starting to look at the new Microsoft Windows OS and Surface devices was what all these seemingly interchangeable names meant. ?Let see, we have:

These are confusion to an experienced technologist. ?How is your grandmother going to know the difference? ?Actually, she shouldn’t have to care. ?The marketing message here is off to me, it should be devices running Windows.
?
Windows RT is a terrible name. ?What does RT stand for? ?I bet most people have no clue what it stand for, let alone that it is the operating system that runs on the new Surface tablets. ?Did you know Windows 8 will run on the upcoming Surface Pro? ?Did you know that your Windows 8 applications will run on the pro version of Surface but won’t run on the newly released Surface tablet running Windows RT? ?Confusing eh??
?
This leaves the mystery of WinRT which is the Windows Runtime that runs on both Windows 8 and Windows RT. ?Clear isn’t it? Please clean up your marketing message, it means you can’t tell a good story.

I think most people familiar with this neanderthal-like rant by Microsoft CEO Steve Ballmer back a few years ago:

This video was pretty popular from the time where a sweaty Ballmer chanted about developers and how important they were to the company. ?

I think this is as important today if not more so, but I’m not convinced the company is in line with this thinking today. ?If I were running Microsoft I would make sure there was an easy and affordable way for developers to get their hand on a Surface tablet long before general consumers hand them in their hands. ?Wny? ?Well, one disadvantage Microsoft has over virtually all other tablet platforms is the lack of applications. ?I know that Apple didn’t have to do this when the original iPad came out, they didn’t have to since there was no competition. ?

Today is a different story though, with Apple and over 500,000 applications and there are more on Android. ?Not all the apps for Apple and Android run on tablets but a large amount do. ?Microsoft is the underdog gorilla in the fight here, they need to be more creative.

Microsoft should embrace developers and get the tools into our hands. ?As someone who has iOS apps in the App Store, I know first-hand that its fine to test applications in a simulator but the real test comes on the hardware. ?Microsoft should be getting hardware to interested developers for at least a nicely discounted price, let me know I’m important to you. ?I would buy one for sure.

It’s the chicken and the egg problem; people won’t buy new hardware unless there’s apps, there won’t be apps until the hardware is in user’s hands. ?Developers are taking a risk spending time to create apps that may never get used. ?It would show great intentions and support if Microsoft help developers out with hardware, on a loaner basis, steeply discount or outright free. ?I doubt the last one would happen but maybe for people who have an app they are bringing to market now.

I’ve seen lots of feedback about Windows 8 and Windows RT on Surface. ?I am not going to rehash anything that is written elsewhere other than to point out a few things worth checking out.

As someone who has seen the Surface tablet and work with it,?David Pogue says the platform needs apps.

Mary Jo Foley has a great?roundup of Surface reviews on her ZDNet blog.

Bottom line, this platform needs applications if anyone will purchase a Surface tablet. ?Applications will not come without developers and Microsoft needs to open up their arms and coffers a bit and welcome developers loudly as they once did.

Windows 8 is the next iteration of Windows, the upgraded Windows 7. ?The user interface is new and a bit confusing, developers need to be writing more apps to fill the Windows Store with the applications users expect on any platform today; Twitter and Facebook clients, Instapaper and all the great apps on Mac and Android. ?This will level the playing field and where there is competition there is innovation.