You are here: Home / Ruby on Rails / Dead Simple Model Diagrams for Your Rails Project
Tweet

While working on Rails project I often find myself wanting a visual representation of my model classes. ?I usually grab a notebook and manually write them out. Depending on the project, it can take time.

I started searching for a diagramming tool that might be easier and faster than writing out by hand, there are a bunch of them out there. ?Most have a steep learning curve and are expensive.

A bit of searching around the web for a Ruby-specific tool lead me to a gem named rails-erd. ?Maybe you have heard of it, maybe I’m the last to know, but regardless it is a nice find.

The gem relies on GraphViz to do it’s drawing magic. ?There are a multitude of ways to install it, I used Homebrew:

Add the gem to your development group in your Gemfile:

When everything is install, from the root of your Rails project simple run:

When the rake task runs, watch the output from the tool. It tells you items you won’t find on the diagram either because it’s not used or a relationship isn’t right.

The result will be a PDF file in the root of your project that looks something like this:? 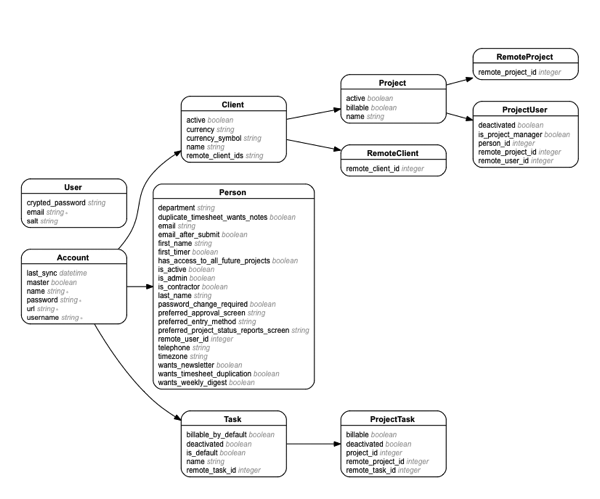 As you can see, it gives a very nice model diagram with all the relations and properties. Just what I was looking for.

The tool is very customizable and the web site outlines everything that can be changed. ?I haven’t looked very much at this aspect since it produced everything I needed the first time.