You are here: Home / Apple / Vesper ? The First App for iOS 7
Tweet 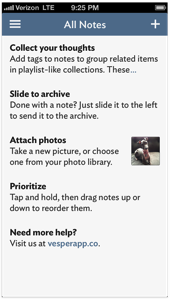 I’ve been spending a fair amount of time with Xcode 5 and iOS 7 lately. ?I can’t mention specifics, but I can say it’s a direction I am very happy to see. ?There are a lot of good things happening in there.

Charles Perry points out how Vesper, the note taking application for your iPhone, is a ?window into what users can expect from design in iOS 7:

As it turns out they were right on the mark. This style of clean, edge-to-edge design that emphasizes content and deemphasizes the interface was exactly where iOS 7 was headed. As Jony Ive explained in the WWDC keynote address, ?In many ways, we?ve tried to create an interface that is unobtrusive and deferential. One where the design recedes, and in doing so actually elevates your content.? And that?s exactly the effect we see in Vesper. Without toolbars, without even separator lines between table view cells, Vesper draws users? eyes to the content so they can quickly access their information and be on their way. This deference to content is going to be a hallmark of iOS 7 design and will be something for all developers to keep in mind as they plan for the future.

Charles has some really good observations that point out the parallel between Vesper and what users can expect in iOS 7 when it arrives in the fall. ?Considering who is on the Vesper team, I wondered how much they knew about iOS 7 redesign while putting Vesper together. ?I’m not the only one:

With so much of iOS 7?s new design anticipated by Vesper, it?s natural to wonder how much of this is coincidence. Did Q Branch get tipped off? Or is this just a matter of great minds thinking alike? Who knows. With this group of characters, it could be either or both. Ultimately, though, it doesn?t really matter. What matters is that now we all can see the new direction that iOS is heading. We know that in iOS 7, content is king. We know that in iOS 7, color and animation are more important affordances than ever before. And thanks to Vesper, we now know that it?s possible to combine these traits of iOS 7 to create a unique app that retains an individual identity while at the same time fitting into the rest of the iOS 7 ecosystem. If you?re one of the many now thinking about your own app and its transition to iOS 7, I suggest that you consider what lessons you can take from Vesper. It?s a great app, but I think we?ll soon see that it?s a great iOS 7 app as well.

I don’t use my iPhone enough to make a commitment to Vesper but an iPad version would be a quick purchase. ?Of course the $4.99 price tag might be a cheap investment to learn a bit about design.