You are here: Home / Ruby on Rails / Running Rails 3 on Windows
Tweet

Well, the long-awaited release of Ruby on Rails 3 is now out and all of the Mac and Linux junkies are busy gem-installing the latest version of the framework.? What about all the lonely Windows developers out there looking through their windows (pun intended) and wondering what it?s like on the other side of the fence?

Running the Ruby version command from a new command prompt:

If you get a file-not-found or some other undesirable result then the path setting isn?t likely correct or you may want to try closing the command prompt and opening a new one.

This is a tough one:

UPDATE: A reader points out of issues with installing Rails as pointed out by a post on the Ruby Forum. The issue was solved by simply adding a –pre to the gem command to install Rails.

Everything you need to run Rails 3 gets installed with the exception of the SQLite3 Ruby gem which Rails uses as the default database provider: 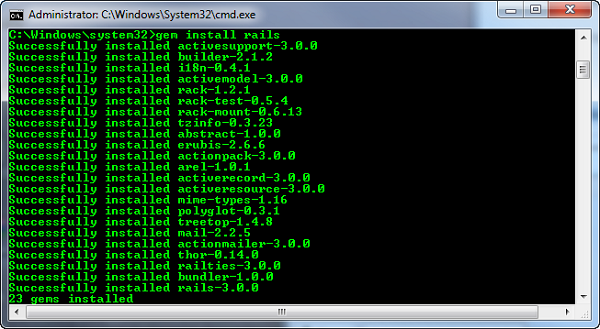 You should see a message similar to this:

I use SQLite3 for most of my local development unless I need a database like MySQL or PostgreSQL.? Installing is trivial.

If you look at the above message when installing the sqlite3-ruby you should notice the gem relies on the sqlite3.dll and it is recommended to use version 3.6.23.1, which you can download form here.? I grabbed 3.7.2 and it seems to work fine, your mileage may vary.? If you?re interested, get the latest from the SQLite3 downloads page.

Now with the sqlite3.dll in hand (unzipped from the download), copy to the bin directory of the above Ruby installation.? In my case that?s C:\Ruby192\bin, and that?s it.

Now it?s time to test the new Ruby and Rails installation.? Pick a location to create the new application and run the new Rails command from a command prompt:

This command creates a new directory called testapp and spits out a bunch of text along the way, looking something like this:

Once done, change directory into the new testapp directory and run:

This will test your SQLite3 installation and create a new development database in the testapp\db directory called development.sqlite3.? If you get any errors it is likely the sqlite3.dll is not in your Ruby bin directory, check and come back.

Now from the testapp directory, fire up the Rails development server from a command prompt:

If there are errors reported than something has gone wrong.? If you see this screen, fire up your browser and browser to the address http://localhost:3000.? If all goes well, you will see this screen: 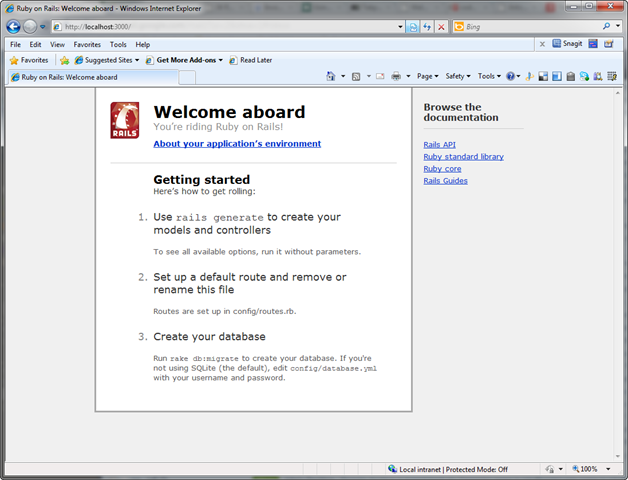 Click on the link below the title that reads ?About your application?s environment?.? This gives a lot of detail about your Rails application configuration. 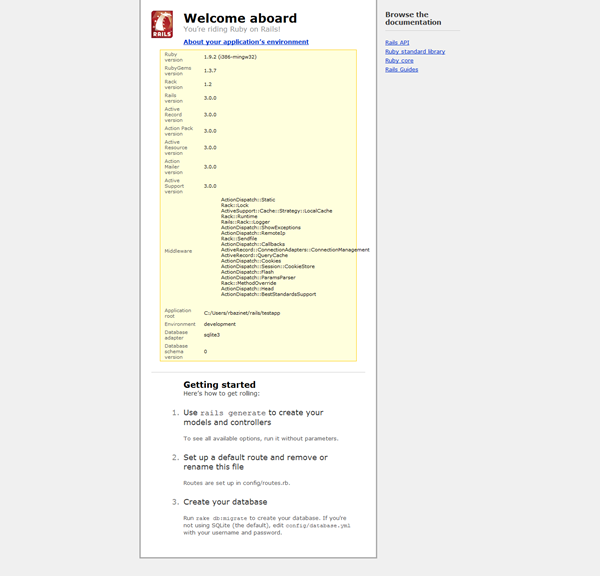 Congratulations!? You have the latest and greatest Ruby and Ruby on Rails running on the Windows platform.

Now go out and read Mike Hartl?s Ruby on Rails Tutorial for Rail 3 and create some applications.